All the Noise and all the Hurry Seems to Help

Reader Beware: Please understand that almost nothing within this post is documented in any form, and that all I’m writing is what I’ve heard in general conversation. Please understand that I’m not always the best listener-I’m easily distracted by shiny objects-so if you’ve spoken to me, and my memory of our conversation is inaccurate, maybe I forgot what you said, or I saw a hummingbird or an angry raccoon, or I’ve read it or seen it discussed somewhere, but it’s also possible that if the subject of the conversation wasn’t of exceptional interest to me, I may well have embellished what I’m writing to make it more personal to me. I’m no journalist. In other words, I’m hardly a reliable narrator-and, as always-pay no attention to the man behind the curtain.

There aren’t a whole lot of pictures in this post, so prepare to read.

Those who know me know that I am generally not a great fan of the city of Las Vegas; my friends are aware that I view The Strip as an ingrowing hair on Satan’s taint–and not a comfortable part of the taint, but the part where one’s thighs conjoin and the hairs tangle–and also that, unlike TE Lawrence, I’m not a particular fan of the desert. Since my friend Thistle took up residence in The Vegas, however, I’ve been to visit several times, and avoiding The Taint, I have found that I don’t entirely despise The Vegas. Downtown Vegas has its own charm, in fact, and brings to mind the efforts that both Hollywood and Los Angeles are taking to (re)create urban centers in spread out cities. Hollywood has been at it for some time, and with the creations of Hollywood and Highland and the W Hotel, which offers residency as well as guest accommodations, my neighbourhood has greatly increased its gentrification over the last ten years. There are a number of good restaurants in the area, as well as the Arclight Cinema, and we even have a Trader Joe’s: for me, a litmus test for someplace to live. Downtown LA seems to still struggle with this concept, but it continues to restore old buildings into loft living, has opened entertainment centers like the Staples Center and LA Live, has numerous venues of cultural and historic import, and continues as a business center of the city. Downtown Los Angeles does not, however, have a Trader Joe’s. Downtown Vegas differs from Hollywood and LA in that it is recent in its reconstructive surgery and in that its rejuvenation is the inspiration and the goal of one man.

Tony Hseih (I thought he was Irish for some time, until I saw the spelling of his name) is the CEO of Zappos, an online retailer which originally offered shoes, but which has expanded to a variety of options, and his headquarters is in Henderson, NV, but he decided he wanted to move it into The Vegas, so he bought the old city hall there, and has gutted it, and is rebuilding it as the headquarters of Zappos. He also chose to purchase various parts of land in the Downtown Vegas area. Mr Hsieh’s goal is to create a working, living, urban center within The Vegas. I commend him. While this sounds like a creation of a medieval fiefdom, and I must admit I have viewed him as “Mr Shea”, garbed in a Bogartian trench coat, cigarette dangling from his mouth, covering the foggy Vegas waterfront, but The Vegas has no fog, and no waterfront. There are, however, sharks in the lagoon of The Golden Nugget Hotel and Casino.*

Mr Hsieh is far more committed to his world than the shadowy figure of my imagination. His enterprize appears to be to community where his employees can work in an environment of comfort and live in a place of culture and custom, one that is largely sustained by independent and local businesses. He has invested a portion of his personal income in this to support his vision, one of community, culture, cohabitation, and creativity. His desire is to create an urban center-I know this is a phrase I’ve used often in this post, but urban and urbane are not unrelated, and urbanity is a goal towards which we must all aspire-and in the last 10 months, I have had the opportunity to observe the steps that have been taken towards this goal. There is no Trader Joe’s, nor an equivalent, but I see the seeds of civilization. Good restaurants. Bars that embrace the science–and it is a science-of mixology. A performing arts center. A delightful candy store. There is much I could say about Mr Hsieh’s involvement in The Vegas, but-not surprisingly-I choose to focus upon food.

Part of Mr Hsieh’s investment within the community of The Vegas is to encourage new and independent entrepreneurs. His enterprise is entitled “The Downtown Project” and part of it is an investment in independent business people. I believe he has done much good in general, but I feel that he has given no greater benefit to The Vegas than his involvement with Natalie Young and the restaurant EAT, in my opinion, the most impactful investment Mr Hsieh has made.

I have twice been to EAT and have been delighted both times. The restaurant has a marvelous story; Natalie Young was a chef at Caesar’s Palace on The Taint, and was sickened by the homogenous environment and gustatorial indifference to her efforts. She determined to pack it up and return to the green, green grass of home, but was waylaid by collaboration of inspiration, including the financial input of Mr Hsieh, that she open her own restaurant. AND THUS SHE DID. EAT is a veritable storefront of a space, opened beneath a small apartment building, and has been in business for I don’t know how long. The first time I ate there was last December, and I ate there again the last time I visited Thistle in The Vegas a few weeks ago. It is a combination of contemporary and mid century style, with an industrial bent. (Pallet boards were used to decorate the entrance, reminding me of the merchandise driven display elements of the inaugural Crate and Barrel.)

The food is what I most remember. In December, December, that misty December, I tried the bacon, lettuce, tomato, and avocado sandwich.

Eat stops serving breakfast at 11am, a commitment neither Thistle nor I have been able to commit to, hence my missing the shrimp and grits and the beignets served only at breakfast-time. On my last visit, again missing breakfast, I tried the chicken pot pie, a puff pastry enveloped delight of a sherry fortified bechamel balanced with chicken, mushrooms, peas and carrots, topped with an over easy egg, and a mesclun salad. 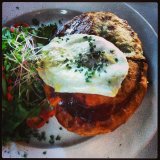 It is as good as anything Musso & Frank’s will offer in the realm of the pot pie, the yolk of the egg blending enchantingly with the bechamel.

In The Vegas, all the BLTs seem to be created from grilled, butter rich bread, rather than toast. In December, my BLAT was served on freshly baked and grilled sourdough, free of mayonnaise, with a side of home fried potato chips. I was delighted. Thistle, who does not share my aversion to mayonnaise, ate his sandwich as annotated, with potato salad, and was delighted. Butter grilled bread-especially when served with fresh baked sourdough–is a marvel.

The raspberry seed in my wisdom tooth was the absence of the beignet, this elusive element only available on the breakfast menu. Those of my readers who have not visited that level of paradise known in the common vernacular as New Orleans will not understand the importance of the beignet. The rabble would call a doughnut or a cruller a beignet; la Antoinette might even refer to it as “cake”, but it is so much more. A beignet is a yeast raised fried dough that is really only seen in New Orleans, commonly served at The Cafe du Monde, alongside a delightful cup of chicory based cafe au lait. A well prepared beignet is the equivilant of sex with angels. (My apologies to the religiosi.)

How sad I was that I missed my beignets. And how startled I was that my friend Thistle asked, Lancelot-like, that Natalie prepare them for me. I will admit that my eyes misted when he returned to the table to tell me I’d get my beignets. And I will tell you, dear reader, that I did not fail to weep when Natalie presented me with that platter of puffed dough, garnished with strawberries, jam, and a whipped nutella, that I took a bite and, Proustlike, I remembered the sweet combination of yeast and sugar, chicory coffee and boiled milk, and I thought of the canopied delight of the jetty, the marines jogging shirtless in short shorts upon it. And I realized that it was not just the coffee and the beignets that made me cry but it was everything I experienced, and Tennessee Williams, and Truman Capote, and I felt as one with America.

*Thistle takes umbrage to this, but considering the threats most sharks pose in the natural world, I don’t think they are too unhappy. They get 3 squares a day and don’t have to worry about having their fins cut off and slowly suffering an anguishing suffocation at the bottom of the sea. Don’t hate on the sharks; they’ll save our lives!

Being timid and meek like Dorothy Gale, I have surprised myself by starting this blog. But a few people have suggested I do so, so there it is. I love to eat and I love to drink, so although this blog could be about almost anything I choose to type, there's likely to be a lot about what you put in your mouth. Why the title? Anyone who knows me knows my reverence for Julia Child. I don't think it's hyperbolic to say that our country's interest in the culinary arts would be all but non-existent but for Her. I would not attempt to count the number of people who have cited Her influence in their lives and careers. What Atticus Finch is to lawyers, Julia Child is to the cook, be s/he servantless or professional. Honesty demands me to say that it is not simply Her advocacy of GOOD FOOD that has immortalized her; She had the happy circumstance of coming into her own at a time when media was in her favour. We can all be thankful for that. I would name Julia Child as the patron saint of second starts, but I'm a happy heretic. Julia's dogma goes beyond the kitchen: She has famously stated that "[y]ou've got to have the courage of your convictions..." Her statement applies as equally to any part of one's life as it does to flipping a potato gallette. I will conclude by noting I have my own personal trinity of Js--Julia, Judy Garland, and Joanna Rowling. Please refer back to that part about my being a happy heretic.
View all posts by What would Julia do? →
This entry was posted in mastication, Uncategorized and tagged eat restaurant, Hollywood, Las Vegas Nevada, Los Angeles, restaurant review, Staples Center, tony hseih, Vegas. Bookmark the permalink.